"The Good, The Bad & The Ugly": The Truth About Dog Parks 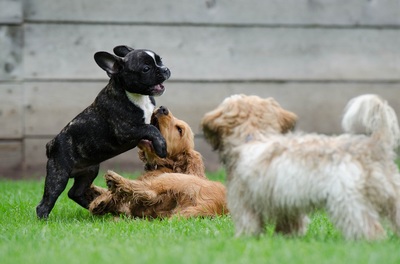 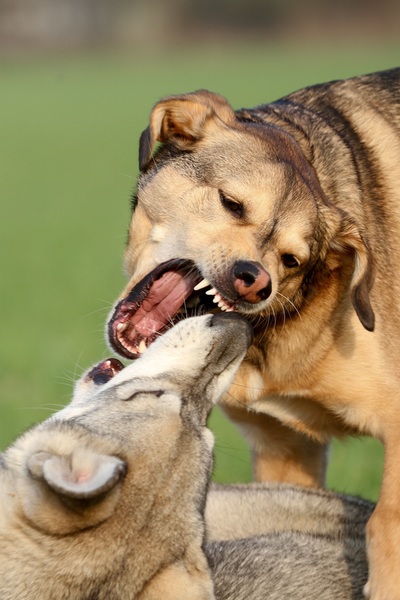 I like to consider myself a bit of a movie buff.  In fact, there was a time in my life when writing and directing movies was my biggest passion outside of dogs.  Maybe in some way I was going to be like the next “do-it-all” Clint Eastwood.  Now I write articles about dogs and take videos whenever I can – the closest I’ll ever get.
​
One of the most controversial topics out there is that of dog parks.  I myself have admitted to many clients that I’m not generally a big fan of dog parks for most dogs.  That’s really only because there are so many ways that an outing at a dog park can go wrong if a dog’s owner isn’t properly educated about the good, the bad, and the ugly sides of these encounters.  We all want to find the gold -  the dual opportunity for our dogs to get out some of their pent-up energy and socialize with other dogs at the same time.  The truth is, dog parks CAN provide great experiences for SOME dogs; but on the flip side, dog parks can also provide highly traumatic experiences for others (like dogs that are insecure, overly dominant, or haven't previously been socialized well with other dogs before their trip to the dog park).  So how do you know whether going to a dog park is right for you and YOUR dog?  Let me share with you…
First, regardless of your dog’s individual temperament and preferences (which we will get into later), there are some things to consider when choosing a dog park.  Some parks are more carefully maintained and have more regulations for safety than others.  These are the kinds of dog parks you want to look for, since they are generally set up in a better way to be the most positive experience for all dogs involved.  Now that's not to say that all users of the dog park will respect these regulations, but the hope is higher than what you might find in a less maintained or regulated arena.
Now that we’ve covered what to look for in selecting an appropriate dog park to attend, let’s talk about what can make a dog park experience good, bad, or downright ugly…
If you’re not sure how your dog may react to the other dogs in the dog park, I recommend staying outside the fence and letting your dog observe the other dogs at a safe distance.  Pay attention to your dog’s body language… Is he calm, timid, or barking and lunging?  Do his movements stay neutral and fluid, slow down or speed up?  What is his breathing like?  What is his ear-set, tail-set, and the overall shape of his body telling you?  A dog that has an owner who will listen to what he is trying to say will have a better experience than a dog whose owner has her own agenda at the dog park.

Most dog parks tend to have some regular “yappy hours” – times of the day when they see more traffic and have a greater number of dogs and their owners going in and out - and there are times where there’s more of a lull – when you and your dog may be one of the only couples there.  If your dog isn’t used to interacting with many different dogs of various shapes and sizes at once, planning to attend the dog park during one of the “lull” times is going to be best.  Doing this allows your dog to acclimate to perhaps only one or two other dogs at a time rather than a whole crowd, and will usually result in a more positive experience.
When my Corgi, Scout, was a puppy, I took him to work with me at Guiding Eyes for the Blind on a daily basis.  During our lunch breaks, many of the staff members took their dogs up to a two-acre fenced-in area in the woods called the “BDA” (for “Big Dog Area”) to get some energy out and to socialize.  For all intents and purposes, it was a dog park where all the people attending were well-versed in canine behavior.  I enjoyed being able to take Scout up there as a pup so he could socialize with other dogs (since he was my only dog in the household). Scout was the only Corgi in a group of dogs that usually included several Labradors, a German Shepherd or two, and an occasional Jack Russell.  You’d think that since Scout and the Jack were about the same size that they would have become fast friends, but this was not the case.  More often than not, Scout found himself the attention of the Labradors and Shepherds who wanted to play with the “big-spirited guy in a little guy’s body”.   This started out all good and fine, all were happy.  Scout and the other dogs would go through periods of running, then tumbling about (which I affectionately referred to as the “Corgi drop and roll”), and then taking off again.  But after a while, I began to notice a change in Scout’s behavior.

Where Scout once appeared fond of this type of play, he started to become more assertive and vocal with the bigger dogs when they would cause him to tumble.  It appeared he no longer enjoyed being the object of the bigger dogs’ attention.  He started standing up for himself more, which is natural to a certain degree, but there were times when I felt his strong reactions were unwarranted.  I realized that having this kind of experience with the other dogs was no longer helping Scout to become comfortable with other breeds; instead, it was causing him to feel like he had to become defensive all the time so the bigger dogs wouldn’t pick on the little guy.  As soon as I made this realization that being in the BDA at lunchtime was beginning to have a negative effect on my dog, I decided we would no longer take part in this ritual.

Now that’s not to say that Scout doesn’t enjoy running free with other dogs anymore.  As a dog owner, I just take my responsibility seriously to ensure that I don’t put my dog in any situations that are too much for him.  This means that instead of running amok in a dog park with many unknown dogs, Scout spends his outdoor time with his canine friends by going on walks or hiking together, usually only a few other dogs at a time – which is what he loves and can handle.   This is just who he is.  He enjoys when I use him to help clients and their dogs have positive dog exposure sessions – he takes his job as cohort very seriously!  Plus, when hiking or walking the dogs have something else to focus on other than one another – they wander and sniff and do other natural dog things, taking the pressure off of the dog-to-dog interaction.  Scout has had a 100% success rate getting along with other dogs when using this method, and he actually looks forward to doing this with some of his best buds!  For more info on how to make this work for your dog, contact me or see my article Introducing Fido to Rufus: Dog Greetings, Pressure Free!

Something else you might witness at dog parks: different breeds having different play styles.  For example, we used to joke at Guiding Eyes that a Lab’s version of play is “let’s mesh spleens!” since they often can be found enthusiastically body-slamming one another; while a Shepherd tends to play herding games by nipping at heels or hocks.  That is, when they are not “policing” the other dogs by getting vocal and trying to step in if other dogs are, in the Shepherd’s mind, playing too rough.  I laughed out loud the first time I watched Scout play with another Corgi!  The style he adopted was to jump and fling his rear end into the other Corgi and then hop away, kind of like a bunny – a behavior I had never seen from Scout before in play with the bigger dogs!  If your dog isn’t used to, or comfortable with, one of the play styles being displayed by another dog at the dog park, it can go from bad to ugly pretty quickly.  This is why it’s super important to monitor your dog the entire time he’s at the dog park – so you can see firsthand how he responds to other dogs of various breeds and sizes coming up to him, initiating play with him (or vice versa) and making sure that everyone is showing they are having a good time.
​
Lastly, there can also be a safety issue for young pups (or elderly dogs) at the dog park.  Puppies still have growing bones and muscles that are more fragile than those of adult dogs, and seniors have weaker bone structure in their older age.  Both can more easily be rough-housed by other dogs and result in injury. Young pups and seniors may also have compromised immune systems and are more susceptible to catching diseases from other dogs (one of the reasons it’s appealing to attend a dog park that requires proof of vaccination for any dog park users).  Something to keep in mind.
What to watch for:  A shy or unsocial dog is often an easy target for a more assertive dog (kind of like how a bully on a playground can easily pick out the quiet kid in the corner playing by himself).  Watch for a dog that is feeling terrorized by another dog by showing signs such as hiding behind your legs, under a bench, or trying to retreat to a quiet corner.  If this situation isn’t dissipated and the other dogs aren’t redirected by their owners quickly, the dog that is trying to hide may feel threatened and, if nobody else comes to the rescue and he is passing the threshold of what he can handle, he is going to stand up for himself.  Unfortunately, that usually comes in the form of a nip or bite.  This dog doesn’t mean to be aggressive, but when “fight or flight” are your only options, and he tried to flee to no avail, fight is next on the list.

Also watch for an assertive dog that is persistent about playing with, jumping on, or mounting other dogs.  This kind of dog usually has a highly activated arousal level, which means he’s not really taking good notes from the other dogs when they tell him enough is enough.  It’s natural for a dog that doesn’t want to be ridiculed or mounted anymore to try to “tell off” the persistent dog, but if that persistent dog’s arousal level is extremely high, it may escalate into a fight of authority pretty quickly before anyone really knows what’s going on or which dog started it.
If you are going to take your dog to a dog park, here are some ways to set your dog up for success:
​

Now that you know the GOOD, the BAD and the UGLY truth about dog parks, you can determine whether or not a dog park experience will be beneficial for your dog.  You also have a few pointers about setting an outing up for success.  Good luck, and above all, much fun to you and your dog!

For more information on dog-to-dog socialization that will build up your dog's confidence around other dogs, appropriate play tactics and behavior, and how to stop the common barking and pulling/lunging issue, please contact me at (845) 549-0896 or  maria@mghcanineconsulting.com.  I'm happy to say that the methods I use to do this have a very high success rate in teaching dogs to get along better with other dogs!
Written by Maria Huntoon, Maria G. Huntoon Canine Consulting Services