The Value Hierarchy - Navigating Your Dog's Preferences to Modify Behavior

In order to properly affect a change in behavior in a purely positive way, a dog needs to know how valuable it is to make a better choice in a given situation than the one that either comes naturally to him or the choice he has learned to make in the past.  To do this kind of conditioning, this is where understanding our dog’s “value hierarchy” comes in handy.  I describe a value hierarchy as a list of items and/or circumstances that hold greater value and motivation for your dog (REWARDS), ranked in order of importance, to be used versus the value of what you are contending against - an item, situation, environment, etc that causes a reaction (STIMULUS).
​
How do you find this value hierarchy and then use it to shape your dog’s behavior?  The process can be broken down into three steps…
Perhaps you find peanut butter biscuits or beef jerky really aren't your dog’s thing.  Well what about freeze-dried salmon or some cut up cooked chicken?  Maybe a little bit of plain cheese (if he doesn’t have a dairy issue)?  Carrots, apples, blueberries?  When my Scout was a pup he was so picky with treats I actually had to resort to buying calf's liver from the grocery store, grilling it up and chopping it into bite-sized pieces - it was the only treat that worked at the time!  Thankfully, his rewards list has expanded generously since then so I don’t have to do that anymore!

Try different chews and puzzle toys for the first time when you are there to observe your dog’s preferences but you aren’t actually interacting with him.  Which ones is he naturally drawn to?  Does he enjoy going to town on a bully stick, love a KONG Classic stuffed with his favorite snack, or get wrapped up in the mental stimulation that a puzzle toy can provide?  If he doesn’t seem to show interest in puzzle toys, maybe he doesn’t know how to figure them out and needs you to give him some hints, like praising him when he pushes his nose against it to roll it along the floor, or he needs to start out with an easier version and work his way up to a more advanced level.  (I’ve actually had this happen with a few clients whose dogs LOVE puzzle toys now that they know how to use them!)

Does your dog really enjoy playing tug with you, or fetching his favorite ball?  How about playing games of “on/off” or hide and seek?  If he finds these activities with you to be super fun, you may be able to use them to motivate him or redirect him as needed in a highly stimulating situation.
​
Note:  if your dog doesn’t find something rewarding (even if we think it should be), you should refrain from using that item/activity/etc.  If it’s not rewarding, it won’t have the same effect and won’t motivate the dog to do his best; it could actually do the opposite.  For example, I don’t like to eat tomatoes.  If someone tried to pay me with tomatoes, I would politely decline (and reconsider if I wanted to work with that person again, haha!)  I find that some dogs do not like to be pet, particularly on their heads, in highly stimulating situations, even if they don’t mind (or even enjoy) being pet when both dog and human are just lounging together on the couch.  So if your dog shies away from you if you reach to pet him in a highly stimulating situation, only offer verbal praise and some tasty treats as rewards and reserve the petting for later when your dog is more apt to enjoy it.
STEP 2: Building Your Dog's Value Hierarchy
Once you have a list of items or activities that your dog finds rewarding, you can start building his value hierarchy.  Present two options on his rewards list (“A” and “B”) to him and take note of which one he chooses consistently.  Then take that option (let’s say it’s “B”) and compare it to another option (“C”) to see what his new preference is.  Does he still pick “B” over “C”?  If so, this means that “B” is higher on his value hierarchy than “C” is.  If his response is inconsistent, he may like both rewards equally.  Continue to do this with different items on his rewards list until you have figured out an approximate ranking for each.

You can also find a reward’s place on the value hierarchy by asking some of the following questions: When given a choice, does he always go to the same toy or chew no matter what you present to him?  Will he drop everything, even the biggest distraction, when you offer him [insert treat here]?  Can you get him to ignore the other dogs during playtime if you jump in with a game of [insert activity, such as“on/off”] with him?  If the answers to any of these is “yes”, then the reward you are presenting to him at that time is at the top of his value hierarchy and usually ranks above the other options.
​
As you’re figuring out this value hierarchy (since it may take a little bit of time), I recommend being prepared with a variety of rewards in every training situation so that if your dog doesn’t like one option in that situation (meaning it isn’t valuable enough), you can pull out a different option and see if that one matters more to him versus what you’re contending against.  If you have a few choices of different calibers, chances are he may show some interest in one of them (helping you figure out its place on his value hierarchy) and you can still ensure that the training opportunity is a positive one and not a missed opportunity for learning!

​Here’s an example of my Scout’s current value hierarchy, with 1 being generally the highest in value and 10 being still valuable but significantly less so compared to others on the list… 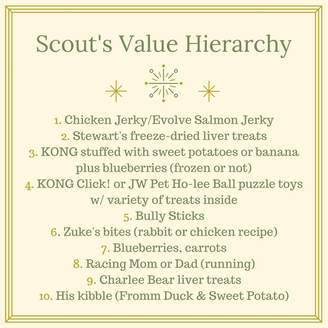 ​Keep in mind: a value hierarchy can change at any time, and what your dog finds highly rewarding in one situation may not apply as much to another situation.  Therefore, this Value Hierarchy is a guideline but be aware that you can add or remove items at any time.  For example, if you overuse a valuable item, it can become less valuable (have you ever really liked something and then had so much of it that you got tired of it?  Exactly.)   Or your dog’s preferences may change over time due to age or other factors – i.e. perhaps chasing the ball used to be a high value reward for your dog but as he gets older and develops arthritis he doesn’t have the same zest for it that he used to have.
STEP 3: Using Your Dog's Value Hierarchy to Modify Behavior
Next, you must understand the things that you are contending against in a given situation which cause an emotional response in your dog (STIMULI, also called triggers).  This response can be due to excitement, stress, fear or a variety of other emotions.  Sometimes a stimulus is a particularly clear item, such as another dog, a dark staircase, a loud noise, etc.  And sometimes a stimulus is more a part of the experience rather than a particular item – such as environmental pressure (so many things happening in the same space) or social pressure (from you trying to get your dog to do more than what he’s capable of at the time).

Once you identify these stimuli, then you must decide how you would like your dog to learn to handle these situations compared to how he currently handles them.  For example, instead of chasing a bike you would like your dog to sit calmly with you as the bike goes by.  Lastly, ask “how difficult will learning this new response be for my dog?” and provide the appropriate value reward for the amount of work your dog will be putting in.  In this example, if your dog is a herding breed (and has a strong natural drive to go after things that move), you will likely have to pull out the things at the top of your dog’s value hierarchy in order to reinforce that sitting calmly with you (a conditioned response) can be more rewarding than chasing the bike (a natural response).

Likewise, if your dog has a hard time dealing with pressure and you find yourself in a high intensity situation where your dog is working overtime to think and make good choices, you will want to reward him with items higher on his value hierarchy.  Whereas if you’re in a pretty low-key situation, or if the lesson requires less work from your dog, you can successfully get away with using items that are lower on his reward list.
​
Below I have listed the situations that are most stimulating for Scout (with situations at the top of the list generally being more stimulating than situations at the bottom of the list).  Since he’s a herding breed that is naturally driven by movement and noise, you will notice that many of these involve those two things.  In parentheses I’ve also included which value items (according to his Value Hierarchy above) I’ve used most often to help him succeed… 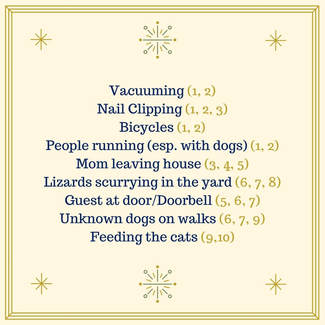 The rate of reinforcement can also play a significant part in this equation.  Since there are situations where we may have to provide a higher rate of reinforcement (more frequent praise and rewards) to our dogs in order to succeed, it may help in these situations if when using treats, we use smaller bite-sized treats that you can give one, after another, then another and it seems like a bigger deal to your dog.  (Think one big ice cream cone versus four small ice cream cones handed to you one at a time: the four smaller cones may feel like more than one single cone, even if they equal the same amount in the end).  The higher the number of rewards your dog receives for making a good choice in a highly stimulating situation, the more value it may hold for him than receiving just a single reward and he will likely be more apt to make that same good choice again next time.


Remember, in order for this to work to influence your dog’s decision-making process and build good behavior, the reward you offer your dog in a given situation must mean at least as much, but preferably MORE, to him than whatever you are contending against (be it a squirrel, person, new environment, etc).
​
One last example: let’s say your dog displays some separation anxiety.  Maybe your dog normally likes his kibble, but when he thinks you may be leaving him, his kibble means absolutely nothing to him (he gets it every day so it’s relatively low-value).  But if he really loves a KONG stuffed with some mashed sweet potato and blueberries, and you give this to him when you leave the house, he might be so interested in his valuable toy that he basically waves you goodbye and looks forward to your leaving so he can enjoy it (instead of freaking out because you’re leaving)!

Now that you understand the steps to creating and using your dog’s Value Hierarchy, have at it!  Your dog will love knowing how rewarding his good choices can be, even in highly stimulating circumstances, and you’ll be proud of him and ready to face whatever situation arises for the two of you!
​Written by Maria Huntoon, Maria G. Huntoon Canine Consulting Services